Spring has officially sprung! Temperatures are starting to rise, the sun is shining a bit longer and there’s nothing more welcoming than fresh crops of spring produce. From asparagus to rhubarb, there are plenty of tasty produce options to explore in your kitchen this season.

Native to the Mediterranean and Asia, asparagus has long been considered somewhat of a luxury vegetable because it takes three to four years for it to grow into the length we see in the supermarket. Most of the asparagus we find in the U.S. is either green or purple. When grown under a blanket of soil, the same seeds can also produce the milder white variety that’s more popular in Europe.

When buying asparagus, look for firm, unwrinkled stalks to ensure freshness. You’ll also want to select slimmer stalks, which generally taste less bitter and earthy than thicker stalks do. To cook this tasty vegetable, you can simply pan-sear the asparagus with some healthy oil, salt and pepper. You can also purée them to create a deliciously fresh spring soup.

Tip: Asparagus has one of the highest respiration rates of any type of produce; it’s nearly 5 times faster than the those of onions and potatoes. This means you shouldn’t store your stalks too close to fruits that release a lot of ethylene gas, such as apples and melons.

Looking for the perfect at-home brunch? Our poached eggs over asparagus recipe is simple yet delicious!

The leek is a cousin to garlic and onions, but usually has a much milder flavor. Subtle and naturally sweet, leeks can be added to soups or savory pies without overpowering them.

To cook leeks, first rinse them under cool, running water for a few minutes to ensure you’ve removed all dirt and grit. You can then chop up the stalk in a number of ways. Most recipes call for the pale green portion of the stalk, but you can use the tougher dark green end and leaves to make stock.

Tips: Leeks are best stored in plastic bags to prevent their unique aroma from being absorbed by other foods in the refrigerator. Avoid washing them until you’re ready to cook, as the extra moisture may cause them to spoil more easily.

Stuck inside on a cold and rainy day? Our potato leek soup can keep you warm!

Scallions, also known as green onions, are available year-round, but usually peak in spring or early summer. They’re closely related to onions even though they look nothing alike and generally have a much milder taste. They make a delicious addition to egg dishes, stir-fries, soups and salads, and you can use both the green and white parts when cooking.

Tip: When choosing scallions, look for ones that have a firm base and are bright in color. Store them in a plastic bag in your crisper drawer.

Scallions make a perfect addition to this basil and tomato frittata! 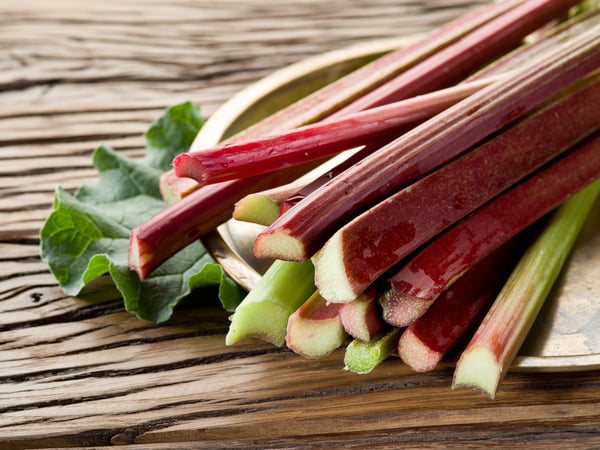 Naturally tart and smooth in texture when cooked, rhubarb has long been a popular pie filling. The celery-like stalks are usually cooked with sugar to balance their tartness, while the leaves are typically discarded because they’re mildly toxic. In addition to using rhubarb as a pie filling, you can also turn it into a compote or syrup.

Tips: When shopping for rhubarb, deeper colors usually indicate more sweetness. Rhubarb also freezes well, so if you’re not ready to use it all or if you cooked too much, simply store the extra in a freezer bag in your freezer.

Wanting to spice up dinner? Try these pork chops with a rhubarb sauce!

Memorial Day weekend is the official kickoff to summer festivities. Side dishes can often take a backseat in the excitement to fire up the grill for some Sweet & Savory... END_OF_DOCUMENT_TOKEN_TO_BE_REPLACED
Cooking Tips
3 min read | April 25, 2021

4 Tips for a Healthier Summer BBQ

Summer is just around the corner, which means it’s time to go outdoors, light up the grill and FINALLY share a meal with family and friends. However, navigating a BBQ... END_OF_DOCUMENT_TOKEN_TO_BE_REPLACED
Wellness
5 min read | April 23, 2021

Celebrating AAPI Month: Love Our People Like You Love Our Food